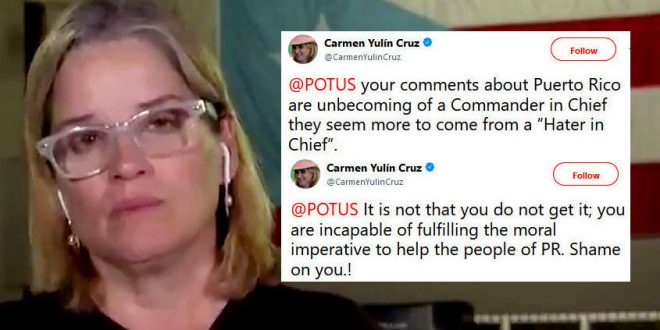 After President Donald Trump continued his tirade against Puerto Rico Thursday morning, the mayor of San Juan shot back and said Trump’s comments sound like they were coming from “a ‘Hater in Chief,’” not the President.

San Juan Mayor Carmen Yulín Cruz — who hasn’t been shy about calling out the President for the federal response to the devastation in Puerto Rico, which she thinks has been inadequate — pushed back.

@POTUS your comments about Puerto Rico are unbecoming of a Commander in Chief they seem more to come from a “Hater in Chief”.

@POTUS It is not that you do not get it; you are incapable of fulfilling the moral imperative to help the people of PR. Shame on you.!