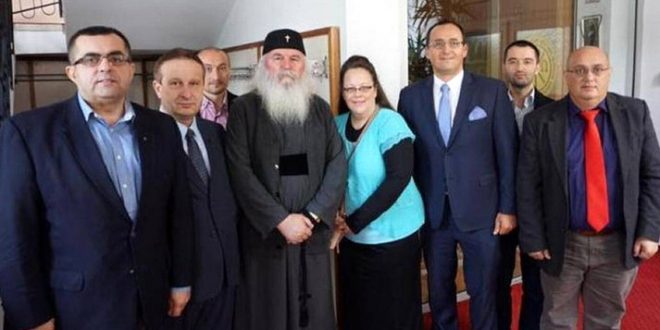 Four-times married adulterer Kim Davis is once again teaming up with the Liberty Counsel, who laughably claimed in 2015 that 100,000 Peruvians had gathered in a Lima soccer stadium to pray while she was jailed for defying the Supreme Court.

Kim Davis, who shot to international prominence for refusing to sign same-sex marriage licenses as Rowan County Clerk, is on a nine-day trip to Romania to encourage adoption of a law against gay marriage.

Davis is in Romania with Harry Mihet, Liberty Counsel’s vice president of legal affairs and chief litigation counsel. A news release from the Orlando-based Liberty Counsel said that more than three million Romanian citizens have signed a petition asking for the nationwide referendum defining marriage as between one man and one woman. The nation’s population is about 20 million.

The petition has been unanimously approved by Romania’s Constitutional Court and is awaiting final approval in its Senate before a public vote can occur, according to Liberty Counsel. Davis and Mihet are holding conferences in Romania’s largest cities, according to the release. The two have already met with two Archbishops of the Orthodox Church.