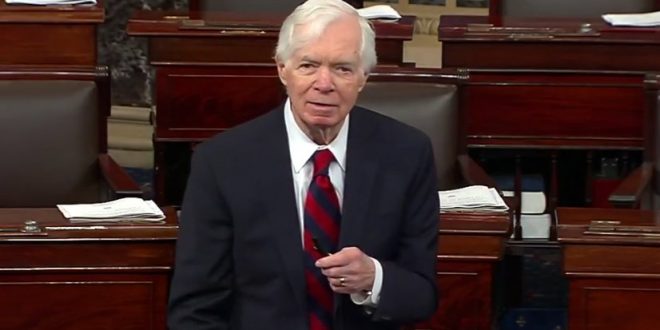 Mississippi GOP Sen. Thad Cochran insists that he is not retiring from Congress, despite widespread speculation about the veteran lawmaker’s health and political future.

The 79-year-old Cochran appeared frail and at times disoriented during a brief hallway interview on Wednesday. He was unable to answer whether he would remain chairman of the Appropriations Committee, and at one point, needed a staffer to remind him where the Senate chamber is located.

“Don’t believe everything you hear,” Cochran said in a low voice when asked whether he planned to retire after 44 years in office. However, when queried over whether he would stay on as Appropriations chairman, Cochran seemed confused and just repeated the question. “As chairman of the Appropriations Committee?” Cochran asked.

When a reporter asked Cochran if McConnell had pressured him to return from sick leave to vote on the budget, Cochran replied, “It’s a beautiful day outside.”

Cochran then voted “yes” on an amendment after an aide repeatedly reminded him that he was a “no” vote. Cochran then changed his vote. There’s more at the link.

McConnell recently hailed Cochran in a Senate floor ceremony marking his 38th year in office, making him the 10th longest-serving US Senator.