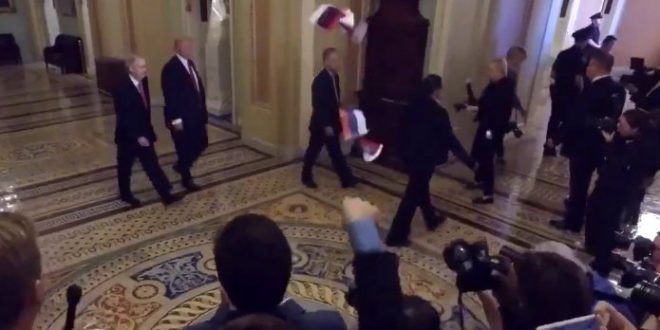 President Donald Trump has arrived on Capitol Hill to lunch with GOP senators after sparring with several of them, as congressional Republicans turn to overhauling the tax code. The president arrived and was escorted by Majority Leader Mitch McConnell as reporters shouted questions. The two are set to meet briefly before they head to Senate policy lunches to greet other Republicans. Meanwhile, an unidentified man shouted and threw what appeared to be Russian flags at Mr. Trump, screaming “Trump is treason!” and “We should be talking about treason not tax cuts!”

President Donald Trump’s entrance to senate lunch was interrupted by a protester who threw Russian flags and shouted “Trump is treason” pic.twitter.com/7BnxcxSLXH

The guy must’ve been 5 feet from the president when he did that. Not sure how he got into the stakeout. SAA staff not happy. https://t.co/K0x1vjjnBe

The protester was yelling about Pres. Trump, Russia and treason when he threw what appeared to be Russian flags at the president. pic.twitter.com/zaPeAqEqY8