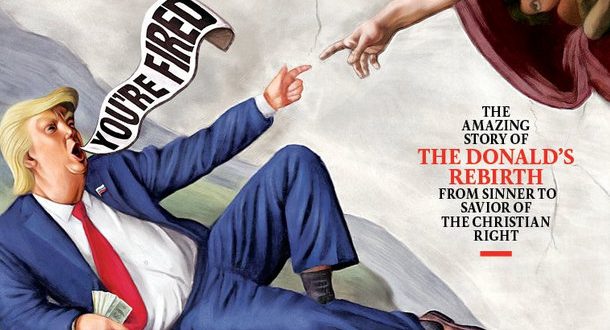 Newsweek: Does God Believe In Trump? Why White Evangelicals Are Sticking With Their “Prince Of Lies”

From a must-read cover story by Newsweek:

For many decades, Trump was the sweaty embodiment of the Manhattan libertine—a Studio 54 denizen who ran a modeling agency as his personal Tinder, and laughingly told Howard Stern that his Vietnam was avoiding STDs when he was a swingin’ bachelor…and a swingin’ married man.

He wasn’t known for his religious faith until sometime in the early 2000s, when he cold-called televangelist Paula White, another prosperity Christian, after seeing her on TV, and they became friends. (Like Trump, she has endured congressional and federal inquiries into her finances.) White soon owned a $3.5 million Trump Tower condo and spent time with Trump when she visited New York City. She later explained that she knew Trump was a true Christian partly because of the way he treated his employees.

In May 2011, Trump asked her to do a little work for him: deliver some religious leaders up to Trump Tower to counsel him on whether he should challenge Barack Obama for the presidency. The group talked with him for two and a half hours, including a 20-minute prayer session, and urged him to have faith in God during what they called the “evil process” of challenging Obama. After that confab, Trump apparently determined God was not ready for him to be in the White House, but four years later, he must have gotten the OK from on high, because he decided to run.

The relationships he’d cultivated with White and the pastors who ministered to him in 2011 earned him favorable early coverage in the Christian media and access to the vast network of megachurches, and it all paid off in November 2016, when he was elected president of the United States. Evangelicals—a quarter of the American people—put him over the top, despite his “New York values.”

Does God believe in Trump? White evangelicals are sticking with their “Prince of Lies”
Read our latest cover story: https://t.co/TzfCEQIfVa pic.twitter.com/w1fHFB5tTc