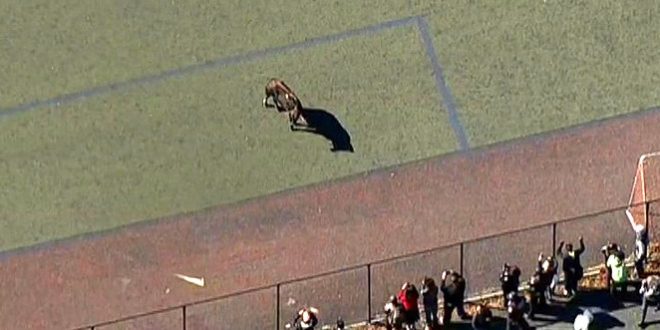 A cow is on the loose in Brooklyn Tuesday, running around ballfields in Prospect Park. Responding crews are on the scene trying to wrangle the animal, which is tagged. It’s unclear where the cow escaped from. In February, a bull roamed the streets of Queens for about two hours before he was finally captured and died soon after.

The cow (a bull, actually) is being tracked by helicopter and Twitter is having a ball.

Hey, has anyone seen a cow?

COW UPDATE: The Brooklyn cow is not backing down https://t.co/NvvFWGq259 pic.twitter.com/GaHDHVoJXt

Simple way to capture the cow on the loose in Brooklyn is to lure it to the D train, where it'll remain stationary for the rest of the day.

if you're hearing helicopters over Prospect Park it's because this brown cow is loose on the Parade Grounds soccer fields! I'M ON COW WATCH pic.twitter.com/kNuKYueylW

Just caught word that a cow is on the loose and I want to announce that I support all those fleeing institutional oppression.