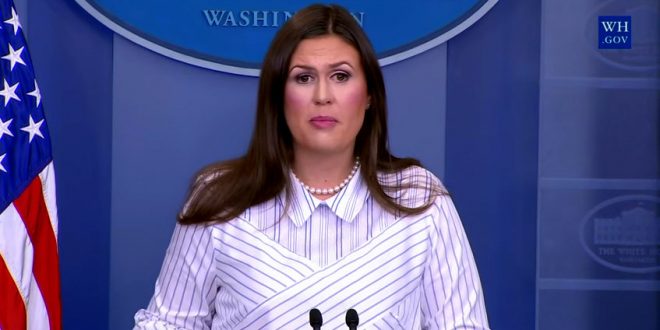 Press Secretary Sarah Huckabee Sanders will hold a briefing with the White House press corps. One thing that’s sure to come up in today’s briefing: President Donald Trump’s cryptic (and somewhat ominous) declaration on Thursday night that a meeting of military leaders marked “the calm before the storm.”

When asked what he meant by that, Trump said only: “you’ll see.” Expectations that Sanders will actually give a substantive answer as to what the president meant should always be low (my bet: she replies with either “the president speaks for himself” or “I haven’t had a chance to speak to the president about that.”)

With today’s anti-LGBT action by Jeff Sessions, keep an eye out for Washington Blade reporter and White House correspondent Chris Johnson, who is sometimes successful in getting in a question on LGBT rights.

Previous Trump Uses Spanish Accent During Hispanic Heritage Month Event Because Of Course He Did [VIDEO]
Next ROMANIA: US Christian Hate Groups Provide Help In Advance Of Referendum To Ban Same-Sex Marriage