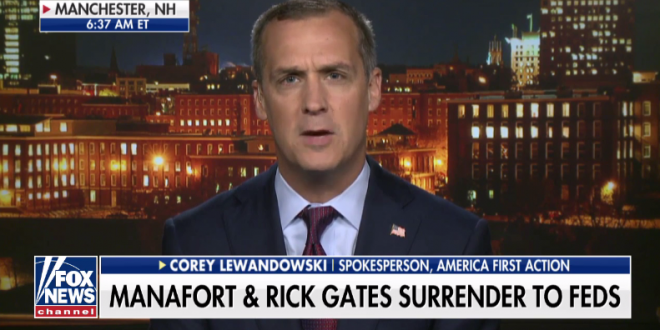 Lewandowski Wildly Contradicts Himself On Manafort

Lewandowski is literally blaming the FBI for not warning Trump about Manafort. Check out the twisting.

“He came on to the campaign in a very limited capacity, to help us find delegates,” Lewandowski said of Manafort, who was hired by the Trump campaign as chairman.

But when Fox News’s Steve Doocy asked if federal authorities are supposed to alert presidential campaigns that their staffers are under investigation, Lewandowski changed his tune on Manafort’s prominence in the campaign.

He replied that Manafort “joined the campaign in a high-profile capacity,” and that “you would think, just from a security standpoint, [the FBI] would brief the campaign and say ‘look, we’ve got some concerns about this person.’”