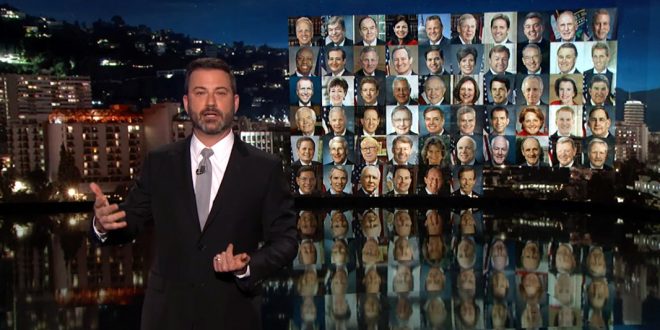 Kimmel Blasts GOP In Emotional Gun Control Plea: You SHOULD Be Praying….For God To Forgive You [VIDEO]

Jimmy Kimmel, a son of Las Vegas, delivered one of the most emotionally searing monologues in his show’s 14-year history on Monday as he honored those killed and injured in Sunday night’s shooting, and challenged President Trump and Congress to act against gun violence.

Just as he did in his attacks on the Republican health care bills this year, Mr. Kimmel used plain, pointed language while acting as a social conscience as he called out politicians, the National Rifle Association and complacent citizens. Choked up from the start, he ultimately broke into tears as he related the events and the aftermath of what was one of the deadliest mass shootings in American history.

“There are a lot of things we can do about it. But we don’t, which is interesting. Because when someone with a beard attacks us, we tap phones, we invoke travel bans, we build walls, we take every possible precaution to make sure it doesn’t happen again. But when an American buys a gun and kills other Americans, then there’s nothing we can do about that. And the Second Amendment, I guess, our forefathers wanted us to have AK-47s is the argument, I assume.”