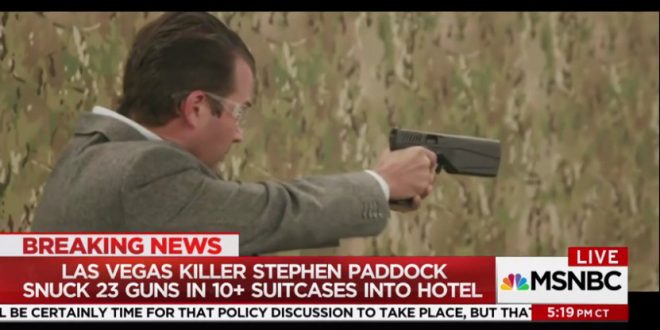 After a lone white man killed at least 59 people and injured more than 500 at a concert in Las Vegas, the gun control debate became increasingly relevant. Logic would suggest that means tighter gun controls, however, the Republicans have other plans. Currently, they are pushing a bill that contains a provision to legalize gun silencers — a device that can make it harder for police officers to figure out where a shooter is and make it harder for victims to escape.

It’s not surprising the GOP is pushing for laxer gun laws considering President Donald Trump and his family openly advocate for NRA and other gun lobbies. MSNBC’s Chuck Todd dug out a video from last year, where one of Trump’s family members marketed gun silencers. It was none other than Trump’s eldest son, Donald Trump Jr., who appeared in the gun industry’s “marketing campaigns aimed at kids.”

Trump Jr. promotes gun silencers because they make it easier 4 children 2 use guns. He says “it makes total sense.” https://t.co/L9XC0LCDAD