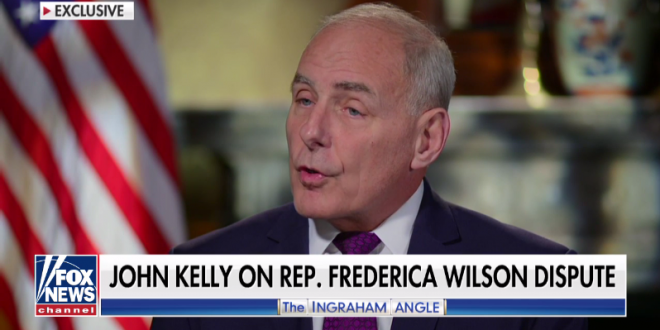 White House chief of staff John Kelly defended his criticism of Rep. Frederica Wilson (D-Fla.) on Monday night by continuing to insist she was insensitive and self-congratulatory during a ceremony to dedicate an FBI building in Florida.

“Well, I’ll go back and talk about … her comments and at the reception afterwards,” Kelly told Fox News host Laura Ingraham. “Well, I’ll apologize if I need to. But for something like that, absolutely not. I stand by my comments.”

When the Sun-Sentinel published video of the event that refuted Kelly’s recollection, the White House defended the retired four-star Marine general by saying someone of his rank and stature should not be criticized. Monday’s comments are the latest in an ongoing tit-for-tat between President Donald Trump, Kelly, other White House officials and Wilson.

White House chief of staff John Kelly spoke to the “good” and “not so good” parts of US history on Monday, speaking highly of Confederate general Robert E. Lee and attributing the origin of the American Civil War to a “lack of an ability to compromise.”

Kelly described history as “evolving,” and said it is “dangerous” to not be cognizant of it, when asked about the removal of historical but controversial statues commemorating Confederate figures during an interview on Fox News’ “The Ingraham Angle.”

“There will be, 100 or 200 years from now, people that criticize us for what we do, and I guess they’ll tear down, you know, statues of people that we revere today,” Kelly told Laura Ingraham. “It’s dangerous, I think. … It’s just very, very dangerous and it shows you what, how much of a lack of appreciation of history and what history is.”

No need to get in the weeds with John Kelly. He holds a racist view of the civil war and works with a racist by telling lies about blacks.

Compromise on what, exactly?

John Kelly is not the adult in the room.
Robert Mueller is.

John Kelly: “Robert E. Lee was an honorable man who gave up his country to fight for his state.”

Dear John Kelly: The United States of America exists because President Lincoln did not compromise. https://t.co/ciEienHASx