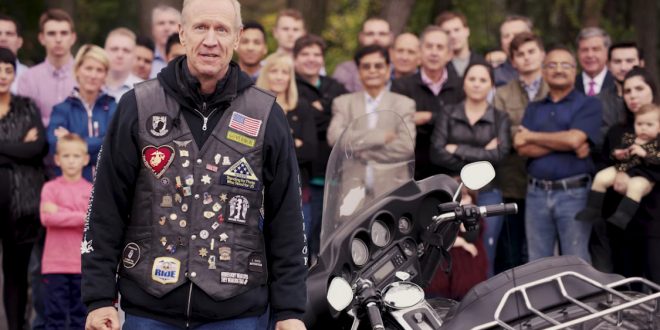 Gov. Bruce Rauner made official Monday morning what had long been expected, formally announcing plans to seek a second term as the state’s chief executive despite turmoil within his own Republican Party.

His campaign released a two-minute-plus video in which a Harley-Davidson riding Rauner criticizes his chief political nemesis, Democratic House Speaker Michael Madigan. Rauner positions his re-election bid to voters as a choice: Either “throw in the towel, walk away and leave our future to the same corrupt career politicians, or we can fight.”

Rauner makes his formal re-election declaration amid contentious times for the GOP in Illinois. The former private equity investor used his personal wealth to rebuild the party into a formidable campaign extension.

But a series of controversial bill signings, capped by last month’s approval of a bill to expand taxpayer-subsidized abortions to women covered by Medicaid and state employee health insurance, have left Rauner searching for a base of support as social conservatives look for someone to challenge him.