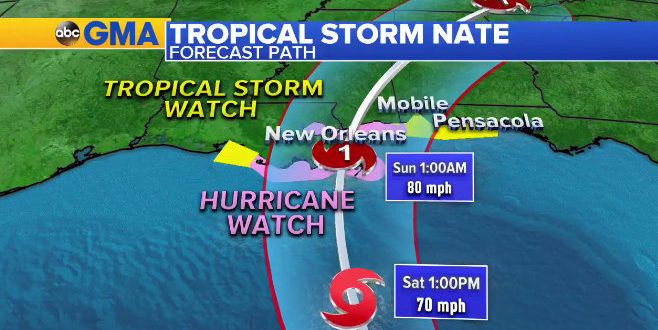 New Orleans, and states from Louisiana to Florida, braced Friday as forecasters predicted Tropical Storm Nate would pound the Gulf Coast this weekend as a hurricane.

The center of the storm was expected to pass late Saturday or early Sunday about 50 miles east of New Orleans, which was devastated 12 years ago by Hurricane Katrina, according to the National Hurricane Center. It would be the third hurricane, after Harvey and Irma, to hit the US mainland in six weeks.

Nate already has killed at least 21 people in Nicaragua, Costa Rica and Honduras, where it caused widespread flash flooding and mudslides, officials said. New Orleans Mayor Mitch Landrieu declared a state of emergency Thursday and advised residents to stay put over the weekend.

It’s now expected that the storm will head north, first towards the Yucatan Peninsula of Mexico and then towards the U.S. Gulf Coast. Besides its likely brush with the Mexican coast, the storm will travel over warm water for its entire journey north, and due to those favorable conditions, it could strengthen into a Category 1, 2, or even 3 hurricane in less than a day.

Whereas earlier predictions of Tropical Storm Nate’s trajectory gave it a higher chance of moving slightly eastwards and heading towards the Florida panhandle, the latest predictions have it heading directly towards New Orleans.