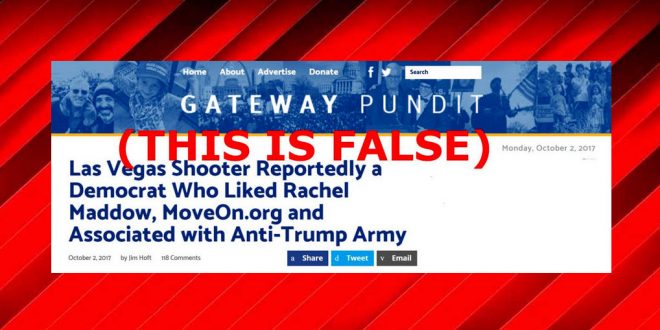 Geary Danley was not the gunman in Las Vegas who killed at least 50 people late Sunday. But for hours on the far-right Internet, would-be sleuths scoured Danley’s Facebook likes, family photographs and marital history to try to “prove” that he was.

The right-wing news site Gateway Pundit also picked up these rumors as fact in a now-deleted article. That article’s URL was still the top result for Danley’s name on Google in the early hours of Monday morning.

The headline, still visible in search results, and remaining on the first page of results for Danley when I ran my 9 a.m. search, read, “Las Vegas Shooter Reportedly a Democrat Who Liked Rachel Maddow, MoveOn.org and Associated with anti-Trump Army.”

After Gateway Pundit accused an innocent Michigan man of being the Charlottesville Nazi terrorist, a lawyer for the man’s family vowed to sue. So far there are no reports that a suit has been filed.

NOTE: The “THIS IS FALSE” message was added by a Twitter user, not Gateway Pundit.

The @gatewaypundit wrote up Geary Danley as the #mandalaybay shooter and then deleted their post. pic.twitter.com/ocXtTOX6rL

Facebook has put The Gateway Pundit at the top of its feed today. Google News promoted a 4chan thread. Silicon Valley, we have a problem.

Jim Hoft of Gateway Pundit is quite literally the dumbest man on the internet. He shouldn’t be believed under any circumstance.