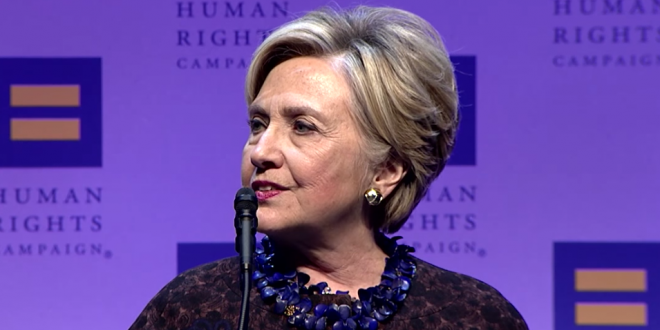 Former Democratic presidential nominee Hillary Clinton on Saturday blasted the Trump administration’s record on civil rights for gay, lesbian and transgender people during its first nine months, telling an audience of LGBT advocates in Washington “we have some tough battles ahead.”

Clinton took aim at the White House’s efforts to roll back the Affordable Care Act and ban transgender service members, as well as its silence on international LGBT issues, during her remarks at the national dinner of the Human Rights Campaign, an LGBT rights organization.

“The attacks on the LGBT community here at home and around the world are striking and scary. I can only imagine what it’s like to be in the position that so many people still find themselves in in our country,” Clinton said. “I do know what it feels like to be torn down and attacked and I want you to know that I’m with you,” she added.

Protesters, many dressed as zombies, on Saturday marched around the Walter E. Washington Convention Center where the Human Rights Campaign National Dinner was about to begin. Following the march, a number of activists blocked the front entrances to the convention center.

Other doors on the side of the convention center were opened to accommodate guests. A statement released by the activist group No Justice No Pride stated the protesters dressed as zombies to “reflect the horror done by HRC partnering with a monster like Wells Fargo.”

Wells Fargo served as the presenting sponsor of the 21st annual HRC National Dinner. “In June, at the Pride Parade, we targeted Capital Pride’s willingness to sell our communities out to harmful corporations,” said Emmelia Talarico, chair of No Justice No Pride’s steering committee. “Today, we’re targeting HRC’s willingness to do the same.” Talarico was referring to the activist group’s disruption of the Capital Pride Parade in a non-violent direct action last June.

VIDEO: Below is the full speech, which opens with an introduction from Billie Jean King.