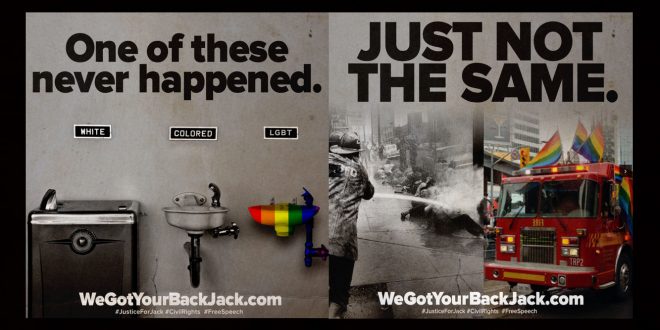 Baking cakes can be a dangerous line of work these days. It’s certainly no industry for cowards, as Edie and David Delorme, Aaron and Melissa Klein, Victoria Childress, and Jack Phillips will attest. In the last few years, their families have gone from selling confections to defending their convictions in court. They’ve been vandalized, threatened, fined, mocked, and sued for one reason: they dared to believe the First Amendment applies to them.

Now, almost a decade into this clash between religious liberty and same-sex marriage, the Supreme Court will decide if they’re right. On December 5, Masterpiece Cakes’s Jack Phillips will stand before America’s nine justices — a representative of the countless Christian wedding vendors who’ve been persecuted for their faith. He’ll ask for the same freedom our forefathers fought and even died to give him — the freedom to live and work according to his beliefs. When he does, he’ll have the support of the nation, according to polls. But just as importantly, Jack will have the support of several African Americans.

Yesterday, a group of black leaders made that quite clear in a special press conference on the steps of the Supreme Court. Tired of hearing the LGBT community compare its experience to the real suffering of the civil rights movement, church and civic leaders decided to speak out about why Jack’s case matters. FRC’s Dean Nelson and FRC Action’s Patrina Mosley spoke, sharing deeply personal stories about the pain and prejudice their families experienced over the color of their skin. Patrina talked about how insulting it is to hear LGBT activists equate their “persecution” to generations of African Americans.

Rev. Martin Luther King Jr. called his brave volunteers an army, Patrina said, but “an army whose allegiance was to God… it was an army that would sing but not slay… no arsenal except its faith, no currency but its conscience.” That currency is for everyone. Let’s pray the Supreme Court agrees. For more on the movement to support Masterpiece Cakes, check out WeGotYourBackJack.com.

I resent having my race compared to what other people do in bed. #jbm #wegotyourbackjack https://t.co/ROhJf47xgY