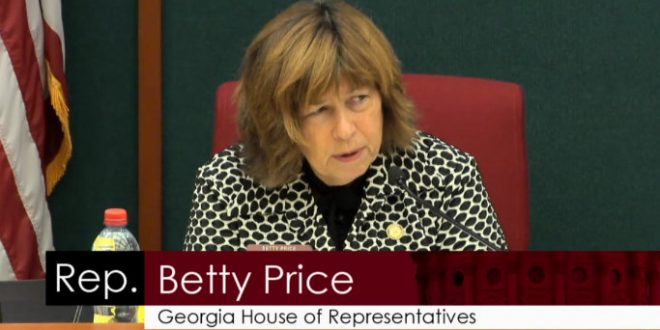 GEORGIA: GOP State Rep Defends Her Suggestion To Quarantine HIV+ People: I Was Just Being Provocative

Georgia Rep. Betty Price said her comments on people with HIV that ignited a national firestorm this week were “taken completely out of context.” Price, the wife of former U.S. health secretary Tom Price, was in a study committee Tuesday when she asked a state health official whether people with HIV could legally be quarantined.

Price said she was just being “provocative.” She said she is not in favor of a quarantine but made the “rhetorical” statement because she was sad and troubled that “too many of our fellow citizens who have HIV are not compliant.”

Here’s that “out of context” quote:

“I don’t want to say the quarantine word, but I guess I just said it. Is there an ability, since I would guess that public dollars are expended heavily in prophylaxis and treatment of this condition? So we have a public interest in curtailing the spread. What would you advise or are there any methods legally that we could do that would curtail the spread?”

“It seems to me it’s almost frightening, the number of people who are living that are potentially carriers. Well they are carriers, with the potential to spread, whereas in the past they died more readily and then at that point they are not posing a risk. So we’ve got a huge population posing a risk if they are not in treatment.”

Price is a medical doctor and is married to former HHS Secretary Tom Price, who resigned last month after a private jet scandal.