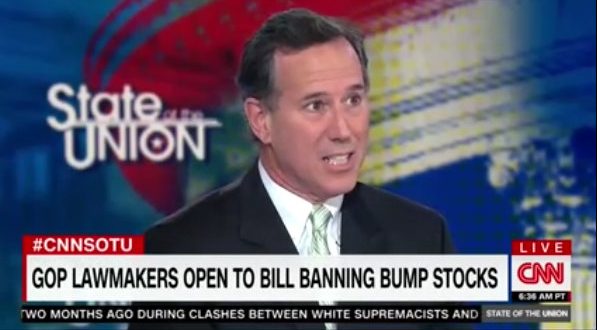 During a panel discussion on CNN’s State of the Union this morning, political commentator and former GOP presidential candidate Rick Santorum waded into the debate by taking aim at the entertainment industry.

After finding consensus with liberals on the banning of bump stocks and modifying semi-automatic weapons to shoot like automatic ones, Santorum then said more attention should be focused on video games and films.

“Violence in television and the video games — there is a mountain of evidence out there, psychological evidence, about what we’re doing to our young people with these video games, violent video games, and you never hear the left trying to go after Hollywood or the gaming market,” Santorum exclaimed.

Previous Trump Rages Against GOP Sen. Bob Corker
Next Mike Pence Stalks Out Of NFL Game In Pretend Huff After Anthem Protest Everybody Knew Would Happen