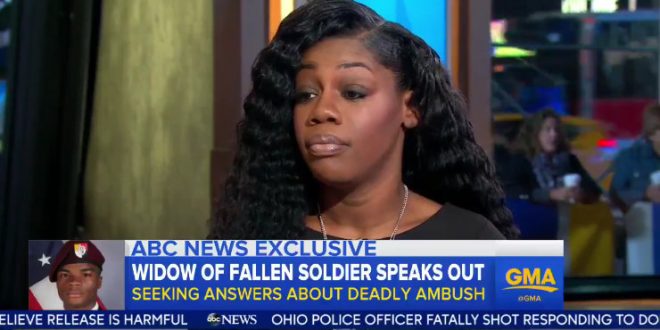 The pregnant widow of Sgt. La David Johnson said the phone call she received from President Donald Trump before meeting her husband’s body at Dover Air Force Base made her more upset as the president struggled to remember her spouse’s name.

“I heard him stumbling on trying to remember my husband’s name, and that’s what hurt me the most because if my husband is out there fighting for our country and he risked his life for our country, why can’t you remember his name?” Myeshia Johnson told “Good Morning America.” “And that made me cry even more.”

Johnson said when the president’s phone call came in to the master sergeant in the car with her, she asked that it be placed on speakerphone so others could hear it. She said that’s when Trump told her, “he knew what he signed up for but it hurts anyways.”

RELATED: Snopes had to debunk the below fake news which has been shared thousands of times across right wing sites.

Myeshia Johnson is sick of politicizing her husband, here is the full statement from @POTUS☝️@RepWilson totally lied and politicized! pic.twitter.com/f18yaG3lFk