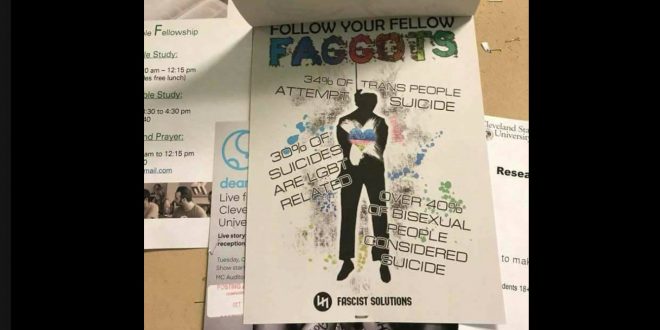 A flier posted all over the main classroom building at Cleveland State University targets the LGBTQ community. “Kinda just surprised and disgusted,” one person on campus said about the flier.

The flier depicts an illustration of a man with a rope tied around his neck. It also gives statistics of what it claims are suicide rates among the LGBT community. It also says in bold letters, “Follow your fellow *expletive*.”

The fliers were posted the same day the school opened its first LGBT center, which Eris Eady with the LGBT Center of Greater Cleveland says was a momentous occasion for the community.

After days of complaints, the school issued a surprisingly useless response:

At Cleveland State University, our foremost priority is maintaining a welcoming environment that provides opportunities for learning, expression and discourse. CSU remains fully committed to a campus community that respects all individuals, regardless of age, race, color, religion, national origin, sexual orientation and other historical bases for discrimination.

CSU also is committed to upholding the First Amendment, even with regard to controversial issues where opinion is divided. We will continue to protect free speech to ensure all voices may be heard and to promote a civil discourse where educational growth is the desired result. Be assured that a spirit of inclusiveness will always be central to the very identity of our University.

According to the report linked immediately above, the fliers were taken down because “prior approval” had not been given before they were posted. And not, apparently, because they encouraged LGBT students to take their own lives. (Tipped by JMG reader Jake)