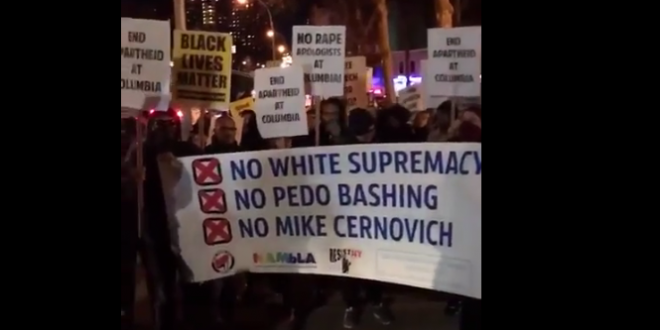 Far-right activist Mike Cernovich, who has previously been busted on leaked text messages suggesting the planting of fake signs at student protests, last night gleefully tweeted out an image of an obviously planted NAMBLA banner at a protest at Columbia University.

Cernovich’s tweet was immediately promoted by fellow extremists Jack Posobiec and InfoWars nutter Paul Joseph Watson, much to the acclaim of their white nationalist followers. Others, however, immediately trashed the stunt as transparent fakery. InfoWars, of course, is reporting the banner as real.

NAMBLA sign at Columbia protests, these people are sick. pic.twitter.com/hIWBKOkooA

Do you think those in the mainstream left & the media who embraced Antifa are starting to regret it? 😄 https://t.co/SOxdbhAFlN

Twitter cernsored this image from @Cernovich – be a shame if there was video that went viral pic.twitter.com/pg7GAWLyAj

It figures that you would have the divorce money to hire people to carry your spare NAMBLA sign around to make another useless facebook vid.

That is obviously a plant. Is that your boy Jack getting you some free publicity while playing agent provocateur? #CaptainObvious #OldTrick pic.twitter.com/G0wHJy9vIa

Previous Hate Group Sues After Air Force Colonel Is Disciplined For Refusing To Follow Protocol On Same-Sex Marriage
Next Roy Moore’s Hate Group Has The Trans Military Sadz: Appalling Ruling Is The Height Of Judicial Arrogance