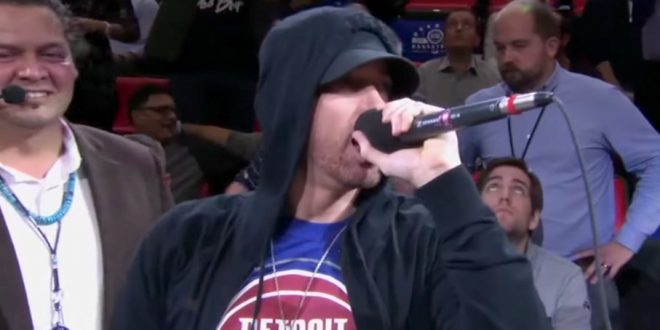 Despite the less-than-sellout crowd — the arena was probably two-thirds full — those who arrived to christen the joint for basketball helped fill it with buzz. The atmosphere was helped by a slick, Pistons-colored light show and an unexpected showing from Eminem.

The rapper took the microphone briefly and worked the crowd into a frenzy. “Let’s go,” he roared, and the crowd roared back with him. A few moments later, the videoboard showed Kid Rock, who was sitting courtside, and who got booed where Eminem got cheered.

The difference didn’t go unnoticed by Pistons head coach Stan Van Gundy, who noted after the game Eminem’s appearance — in front of NBA commissioner Adam Silver, who was there to pay homage to the Pistons’ new home — said plenty. ”Without making a statement, they were able to make a statement,” said Van Gundy.