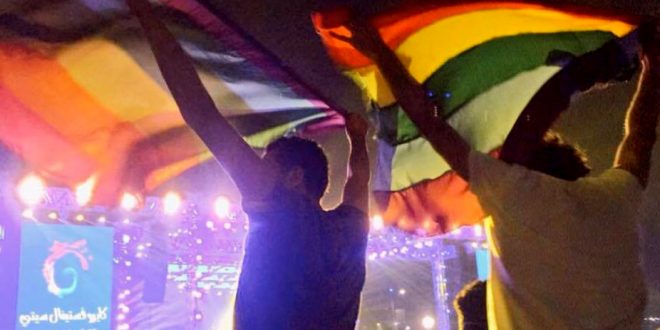 The flag-raising provoked a public outcry and prompted the public prosecutor to order an investigation. Homosexuality is not explicitly criminalised under Egyptian law. But the authorities routinely arrest people suspected of engaging in consensual homosexual conduct on charges of “debauchery”, “immorality” or “blasphemy”.

The raising of rainbow flags at the concert by the Lebanese band Mashrou’ Leila – whose lead singer is openly gay – on 22 September was a rare public show of support for the LGBT community in the conservative Muslim country.

The Supreme Council for Media Regulation (SCMR) has released an order to ban all forms of support towards the LGBT community on media outlets. Head of the SCMR Makram Mohamed said in a statement that homosexuality is a ‘shameful disease’ and shouldn’t be promoted on media. It further added that homosexuals should not be allowed to integrate unless they receive treatment in order to maintain public morality.

Additionally, they should only appear on media outlets to repent and admit that it is an unacceptable behavior. Moreover, the Syndicate of Musical Professions banned Mashrou’ Leila from performing in Egypt. Earlier in April, President Abdel Fatah al-Sisi issued a decree to establish three new bodies to regulate the work of the media in Egypt. The three bodies are the Supreme Council for Media Regulation (SCMR), National Press Authority (NPA) and the National Media Authority (NMA).

The news has caused many within Egypt’s LGBTI community to flee as activists warn others to avoid meeting people that they do not know amid fears of further arrests. While some with foreign passports, visas or financial backing may have the means to flee abroad, the reality is that most are left fearing arrrest at any moment in their home country.

“Whether they were waving a rainbow flag, chatting on a dating app, or minding their own business in the streets, all these debauchery arrest victims should be immediately released,” said Sarah Leah Whitson, the Middle East and North Africa director at Human Rights Watch.

We cannot begin to explain how saddened we are to see yet another era of backwards tyranny creep over one of our most beloved countries and audiences. This crackdown is by no means separable from the suffocating atmosphere of fear and abuse experienced by all Egyptians on a daily basis, regardless of their sexual orientations.

We denounce the demonization and prosecution of victimless acts between consenting adults. It is sickening to think that all this hysteria has been generated over a couple of kids raising a piece of cloth that stands for love.

The amount of boastful ignorance, hate speech, and lies that have emerged in the press is unthinkable. We urge the Egyptian press to wake up to the catastrophe that they’ve generated and take responsibility for the inflammatory lies that they’ve published over the last 10 days. We denounce the hate speech that has been adopted by both the state and the media.

Hit the link above for their full statement in both English and Arabic. The band is currently on a short US tour.

Last night at @thebirchmere in Alexandria, VA! Thank you all for the awesome time. Next stop SF on Oct 4th and LA on Oct 7th! pic.twitter.com/zwK80ydsJl

Previous UN Human Rights Council Condemns Death Penalty For Homosexuality, United States Votes Against Resolution
Next Trump Again Blames Puerto Ricans As He Departs For Visit: The Locals Have To Give Us More Help [VIDEO]