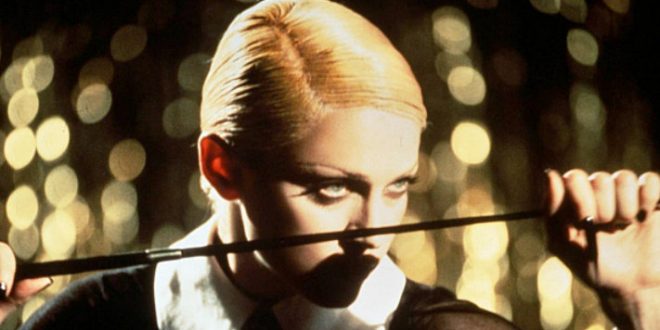 This week it’s been 25 years since the simultaneous release of Madonna’s Erotica album and her still controversial S&M-filled coffee table book, Sex.

Legendary Rolling Stone critic (and longtime JMG reader) Barry Walters has written a deep dive into their legacy and how they addressed the then-raging AIDS pandemic, which tore through Madonna’s inner circle. Walters unpacks quite a bit, so let’s just start with his opening paragraphs:

In 1990, Madonna was as astronomically popular as a boundary-bulldozing, unapologetically bacchanalian performance artist could get. Drawing from Harlem drag balls, “Vogue” went Number One nearly worldwide. The tour showcasing it, Blond Ambition, mixed spectacle with social commentary so sharply that it reinvented the pop concert and yielded the smash documentary Truth or Dare. And that year’s The Immaculate Collection, her first greatest-hits set, would eventually rank among the world’s biggest-ever albums, despite MTV banning its gender-blurring and cinematically exquisite “Justify My Love” video.

Some loathed this classically trained dancer/DIY provocateur – a megastar peer of Prince and Michael Jackson since her 1984 blockbuster Like a Virgin – with a venom reserved for successful women forging their own path. But for her vast audience, she was nothing less than liberating, and her uninterrupted string of hits defined pop for a decade. What some considered violations of taste made her more commanding: Even the way she toyed with ordinarily unflappable talk show hosts like David Letterman was more rock & roll than actual rock stars.

Nearly everything changed two years later with Erotica and Sex. Released respectively on October 20th and 21st, 1992, the first fruits of her multimedia Maverick entertainment company weren’t flops; her fifth studio album, Erotica racked up six million sales worldwide and yielded several hits, while Sex – an elaborate coffee table book created with fashion photographer Steven Meisel and Fabien Baron of Harper’s Bazaar – sold out its limited 1.5 million printing in a few days, an unparalleled success for a $50 photography folio bound in metal and sealed in a Mylar bag to evoke condoms. It remains one of the most in-demand out-of-print publications of all time.