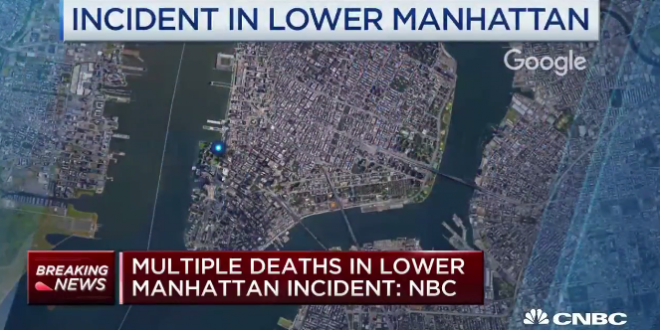 A suspect had been taken into custody after police officers in New York City responded on Tuesday afternoon to reports of a shooting or vehicle collision in Lower Manhattan, the authorities said. A law enforcement official said there were reports that several people were dead.

The Fire Department said officials responded just after 3 p.m. to reports of a mass casualty at Chambers and West Streets near Stuyvesant High School. The police said around 3:30 p.m. that they were not looking for additional suspects.

Witness Frank Brito, 45, told the Daily News he saw two trucks crash into each other and then a heavy set man get out of one in a blue tracksuit and chase someone, firing five or six times. Reports of an active shooter came in about 3 p.m.

I’m shaking. That’s the corner I was supposed to have my coffee but my dog pulled me into the park half a block away 10 min before shooting. https://t.co/AvQeRv7Jha

NBC News: Multiple people have been shot near the West Side Highway and Chambers St. in New York City. Unclear how bad the injuries are.

SOURCES: man driving box truck hits multiple people while going wrong way in bike lane near West & Chambers St. He crashes & exits w/ what is believed to be BB gun. He was shot by police & is in custody.