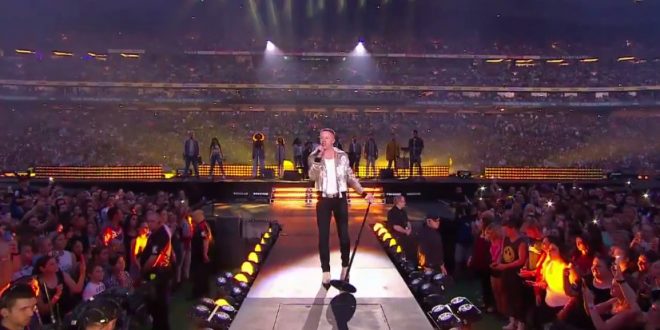 The US rapper, Macklemore, issued a call for equality after an emotional performance of his hit single, Same Love, in a much-hyped pre-game show at the NRL grand final.

The performance at ANZ Stadium in Sydney follows a bizarre week in which the hip-hop artist became the focus of national attention due to his decision to play the song as part of his setlist in the midst of the campaign surrounding Australia’s non-binding, voluntary postal survey on marriage equality.

Macklemore has previously described Same Love as a song that “deals with equal rights, human rights” for LGBTI people. “This is an issue that I feel strongly about, that I feel passionate about. These people are human beings that should have the exact same rights as everybody else,” he said.

Same Love, first released in 2012, rocketed back to #1 on the Australian charts this week after the plan to perform it at the rugby final was denounced by former prime minister Tony Abbott. Macklemore has said the latest proceeds from sales of the single will go to Australia’s marriage equality movement.

So that was #Macklemore. Anyone have a sudden compulsion to marry Cory Bernardi’s dog? Me neither.#NRLGrandFinal #VoteYes

Macklemore’s song was so moving. First time I’ve cried in response to an artist I’d never heard of a week ago. #marriagequality

Hot damn I hope the vote no-ers are enjoying this.
“No freedom till we’re equal,
Damn right I support it.” 👊 #NRLGF #Macklemore pic.twitter.com/Lu7gU47Rtm

Incredible response from the crowd to @macklemore So moving. #nrlgf #ssm

If you missed #Macklemore performing Same Love at the #NRL Grand Final here is the video pic.twitter.com/cA16R4gSMn