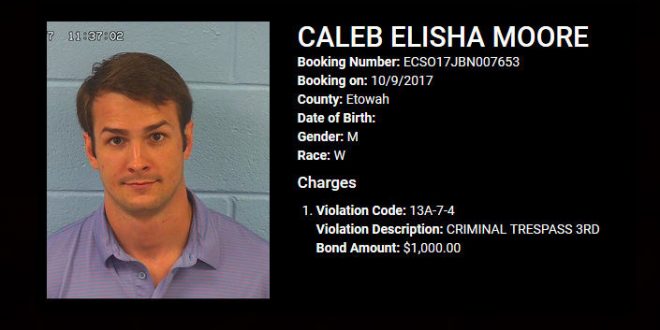 The son of Roy Moore, Republican nominee for the U.S. Senate, turned himself in for third-degree criminal trespassing on Monday, the Etowah County Sheriff’s Office said. Caleb Elisha Moore, 27, was booked into Etowah County Jail at 10:31 a.m. He was released on a $1,000 bond a few minutes later, spokeswoman Natalie Barton said. Barton said Moore turned himself in after the County Circuit Clerk’s Office issued the warrant.

This is the ninth time Moore has been placed in jail. He arrested for drug possession in Troy in 2015. Those charges were dropped last year after he agreed to enter a pre-trial diversion program with the Pike County District Attorney’s Office, court records show. He has also faced charges of driving under the influence in both Alabama and Florida, and three drug-related arrests in Baldwin, Pike and St. Clair counties in Alabama.