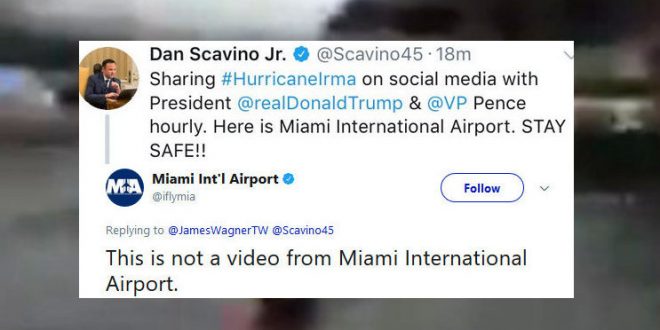 White House director of social media Dan Scavino, who is literally Trump’s former golf caddie, got slammed on Twitter this afternoon after he tagged Trump and Pence with a video he claimed showed a flooded Miami International Airport.

As you can see, the airport itself immediately called out the fake clip, which Scavino then deleted. And as many on Twitter have noted, it’s enormously reassuring that the White House is getting its hurricane news from randos.

You may recall that it was Scavino who tweeted out the infamous anti-Semitic meme which attacked Hillary Clinton.

The White House is literally tweeting out fake news during a national disaster (and apparently sharing fake videos with the President). pic.twitter.com/LYud9ydbPP

Previous Hillary: “I Am Done With Being A Candidate” [VIDEO]
Next FLORIDA: 4.5 Million Without Power, Key West Largely Unscathed, Damage Much Worse In Middle/Upper Keys