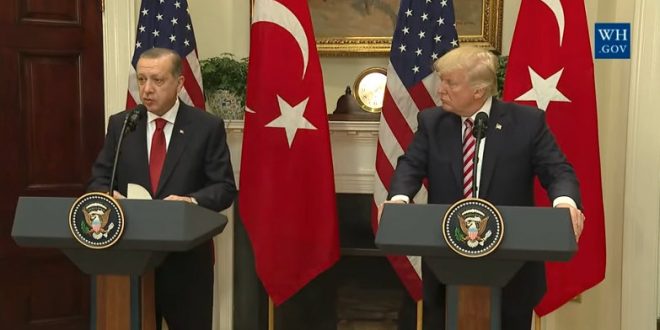 Turkish President: Trump Called To Apologize After My Bodyguards Were Indicted For Beating DC Protesters

Turkish President Recep Tayyip Erdogan said President Trump called him to apologize after members of his security detail were indicted for attacking protesters during his visit to Washington, D.C., in May. “Actually President Trump called me about a week ago about this issue,” Erdogan said, through a translator, during an interview with “PBS Newshour” that aired Tuesday. “He said that he was sorry and he told me that he was going to follow up on this issue when we come to the United States within the framework of an official visit.”

Nineteen people, including 15 members of Turkish President Recep Tayyip Erdogan’s security detail, were indicted in August for attacking peaceful protesters outside the D.C. embassy. The charges, dealt by a grand jury, detail the assault in which the defendants attacked the peaceful demonstrators outside of the Turkish embassy. All 19 are charged with conspiracy to commit a crime of violence, a felony punishable by a statutory maximum of 15 years in prison, according to the Associated Press. Several face additional charges of assault with a deadly weapon.