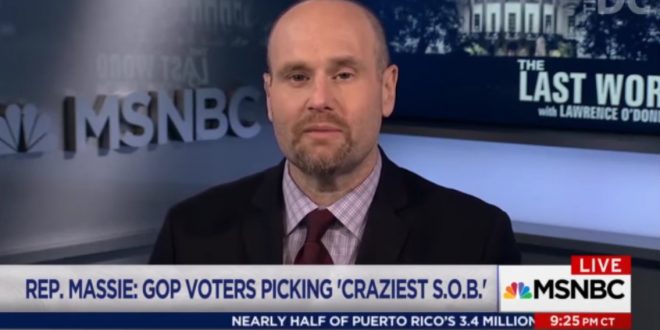 This afternoon the right wing site Daily Caller, which was founded by Fox News host Tucker Carlson, went full anti-Semitic with a video mocking New York Times reporter Glenn Thrush, who is Jewish. Watch below as the Daily Caller loops Thrush’s pronunciation of “chutzpah” over and over as Hava Nagila plays in the background. Blue check Twitter is aghast.

UPDATE: The Daily Caller deleted the video within minutes, but somebody was quick enough to make a copy.

In this 24-second video, the @DailyCaller mocks @GlennThrush for being Jewish and that’s it. That’s the whole thing. https://t.co/vdx2cve9iO

hey @DailyCaller what the hell is this and which anti-semite are you firing?https://t.co/9dckpcVF3t

This Daily Caller ad has NYT’s Glenn Thrush repeat “Chutzpah” on loop while Hava Nagila plays. It ends by saying the Daily Caller takes you “behind the scenes”.

My mouth is still agape. This is blatantly anti-Semitic. https://t.co/kRGx5fjN9c

Am I seeing this correctly and the Daily Caller made a vid of Thrush saying “chutzpah” w hava nagila playing? https://t.co/myW0bwnNVc