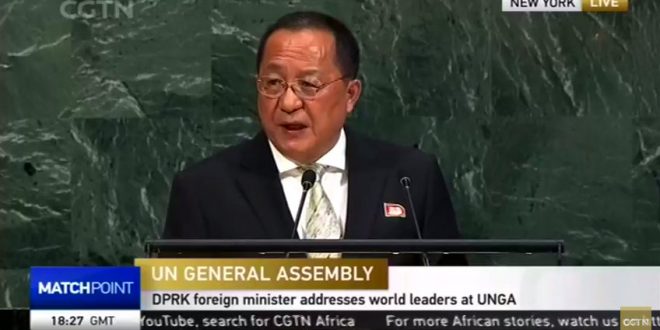 President Trump’s recent insults against North Korea have only made it likelier the U.S. will be attacked, the country’s foreign minister warned Saturday. “Due to his lacking of basic common knowledge and proper sentiment, he tried to insult the supreme dignity of my country by referring (to it as) a ‘rocket,’” Foreign Minister Ri Yong Ho said during a speech at the U.N. General Assembly.

“By doing so, however, he committed an irreversible mistake of making our rockets’ visit to the entire U.S. mainland inevitable all the more. Trump might not have been aware what is uttered from his mouth…but we will make sure that he bears consequences far beyond his words, far beyond the scope of what he can handle even if he’s ready to do so,” he continued. “The very reason the DPRK had to possess nuclear weapons is because of the U.S.,” he said.

In contrast to #Trump Admin claims that this is way of #peace, sanctions are act of war. The #DPRK has unrestricted right of selfdefense. 🇰🇵

#USAirForce bombers menaced our coastline today. 28000 US troops R at our border. R #DPRK forces on US border? https://t.co/HG6vaf215Q 🇰🇵

Thank you @DonnaFEdwards for telling truth about the stinking #Dotard @realDonaldTrump and his racism. The people of the #DPRK are w/ u.🇰🇵 https://t.co/KokaKZ2we6

Previous Trump: Stand For The National Anthem Or Get Fired
Next NBA 2017 Champions: We Won’t Visit White House