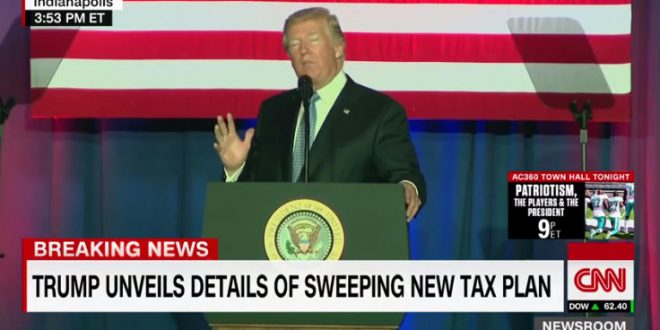 Trump On His Tax Plan: It’s Not Good For Me [VIDEO]

Trump today unveiled his tax reform plan before an adoring Indianapolis crowd, where he out and out lied about the plan’s impact on his own taxes.

The plan — which proposes shrinking the seven individual tax brackets down to three at 12 percent, 25 percent, and 35 percent — is being promoted as a win for the middle class because it will also double the standard deduction for all taxpayers. Critics, though, point out that it raises taxes on the lowest income bracket from 10 percent to 12 percent and lowers taxes for the wealthiest Americans, from 39.6 percent to 35 percent. Trump, though, insisted “it’s not good for me, believe me.”

Big headline today is Donald Trump is going to try to cut his own taxes by a huge amount.