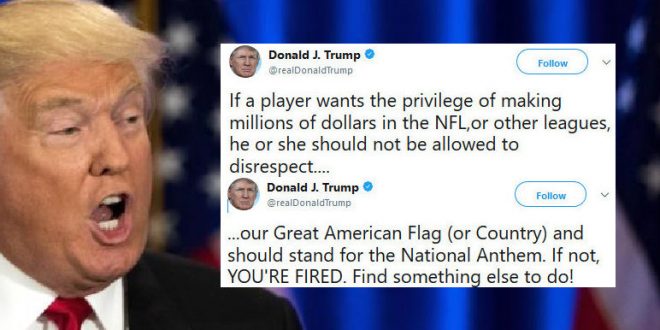 Trump: Stand For The National Anthem Or Get Fired

President Trump doubled down on his comments blasting the NFL and “other leagues” on Saturday, saying players should “find something else to do” if they cannot stand during the national anthem.

Trump continued his war of words with sports players after stirring backlash on Friday by blasting NFL player Colin Kaepernick and other players who kneeled during the national anthem at games.

“Wouldn’t you love to see one of these NFL owners, when somebody disrespects our flag, to say, ‘Get that son of a b—- off the field right now. He is fired,'” Trump said in Alabama.

The president further escalated his feuding with professional athletes on Saturday morning, announcing he was disinviting Golden State Warrior player Stephen Curry from the White House.

If a player wants the privilege of making millions of dollars in the NFL,or other leagues, he or she should not be allowed to disrespect….

…our Great American Flag (or Country) and should stand for the National Anthem. If not, YOU’RE FIRED. Find something else to do!

If U.C. Berkeley does not allow free speech and practices violence on innocent people with a different point of view – NO FEDERAL FUNDS?