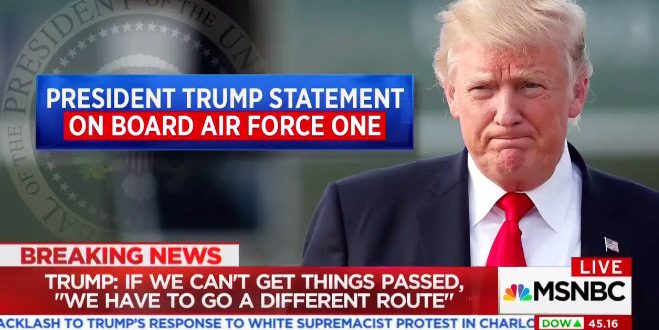 When asked about his Wednesday talk with Republican Sen. Tim Scott, President Trump told reporters that the two had “a great talk” and that, regarding the white-supremacist rally in Charlottesville, he told the senator that “you have some pretty bad dudes on the other side also.”

The president then continued to relitigate his equivocating comments about “both sides” leading to the death of an anti-racism protester at the event.

“Now because of what’s happened since then with Antifa. When you look at really what’s happened since Charlottesville, a lot of people are saying and people have actually written, ‘Gee, Trump may have a point.’ I said there’s some very bad people on the other side also,” the president told reporters.

Trump, on AF1, again defends original Charlottesville response, says "with advent of Antifa" there were "pretty bad dudes" on both sides

A month after blaming "both sides" for the violence in Charlottesville, Trump stands by his remarks https://t.co/4Q9wEZ6l9e

Trump defends controversial “both sides” Charlottesville response: “I said, very bad people [are] on the other side, also, which is true.” pic.twitter.com/18p3KFEq3o