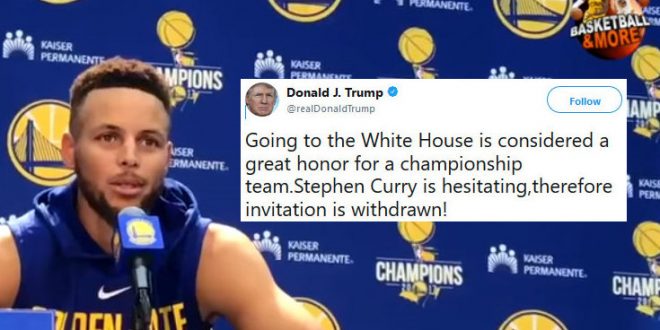 “I don’t want to go,” Curry told reporters on Friday. He said in June he “probably” wouldn’t go to the White House, and this week said he didn’t think the team should go either. Managers said they will discuss the decision as a team in an open forum.

From the San Francisco Chronicle:

Friday’s media day was the first time the team had gathered since their NBA championship parade. Though the possible White House visit has been a talking point throughout this very short offseason, there has never been an official discussion about the topic.

The leader of the team, Stephen Curry, made it clear where he stands. He already said earlier in the summer he didn’t want to make the visit. “My views haven’t changed,” he said. “I don’t know if they can be changed. “I don’t want to go. That’s the nucleus of my belief. If it was just me, it would be a pretty short conversation.”

Going to the White House is considered a great honor for a championship team.Stephen Curry is hesitating,therefore invitation is withdrawn!