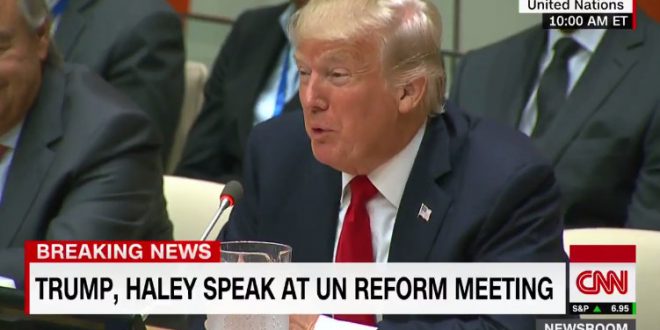 Well then. President Trump kicked off his Monday speech before the United National general assembly with a plug for his nearby residential tower.

“I actually saw great potential across the street, to be honest with you, and it’s only for the reason that the United Nations was here that that turned out to be such a successful project,” Trump said, after an introduction from U.N. Ambassador Nikki Haley.

The building in question is the Trump World Tower, a residential skyscraper in the United Nations Plaza. The building was completed in 2001 and was briefly the tallest all-residential tower in the world. Previous tenants have included Yankees baseball player Derek Jeter and presidential adviser Kellyanne Conway.

#Trump begins UN speech by bragging about his building across the street. pic.twitter.com/sE7rtW6aUs