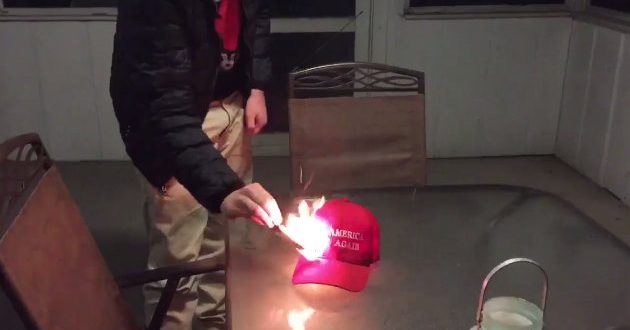 Donald Trump’s supporters have begun burning his signature MAGA hats in protest against his big-amnesty-for-no-wall deal with Democrats. Trump has sold millions of hats so there are many more to burn if Trump goes ahead with the vaguely described plan to support the Democrats big “dream” amnesties in exchange for token improvements to border security — despite his campaign-winning, pro-American, immigration-reform-and-border-wall platform.

More importantly, the hat-burning may presage a huge demoralization among Trump’s loyal followers, and cause his support to drop down to the basement levels achieved by President Goerge W. Bush when he pushed for an amnesty in 2006 and 2007. Bush’s ratings fell to almost 30 percent — despite the booming economy — once he alienated Republicans in 2006 by pushing for cheap-labor amnesty bills.

Know why Trump is having a Twitter meltdown this AM? He noticed #burnmyMAGAhat is trending. All those red hats going up in smoke! #sad