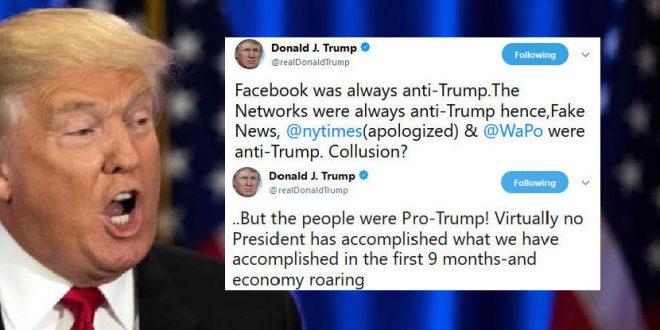 President Trump alleged Wednesday major media organizations and social networks are working in a vast conspiracy against him. Trump has long maintained the media is out to get him and harm his administration, or at the very least not telling the full story of his presidency or electoral victory.

The tweet comes after Facebook revealed Russian-connected organizations bought hundreds of thousands of dollar worth of advertisements on the social network The ads focused on controversial political topics and Kremlin experts believe the goal was to sow division among the network’s users.

Note that Trump lied for the hundredth time about the New York Times apologizing.

..But the people were Pro-Trump! Virtually no President has accomplished what we have accomplished in the first 9 months-and economy roaring