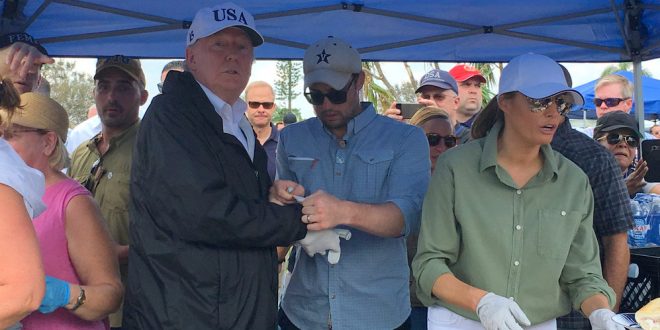 President Trump, who’s been dealing with smart alecks making fun of his gerbil hands since he was a fixture in Spy magazine, made a show of not being able to fit into a pair of rubber gloves on Thursday, the second time he’s done so in as many weeks.

During his trip to hurricane-ravaged Naples, Florida, Trump, along with the First Lady, vice-president, and others, passed out lunch to people working to clean up the coastal town.

According to the White House pool report, Trump positioned himself behind a tray of sandwiches, where he attempted to put on a pair of rubber gloves. He struggled to fit them over his mitts, declaring, “They’re too small.”

This is the second time in two weeks that Trump has showed up in a disaster zone and bragged about his big hands https://t.co/CvfFziprpK