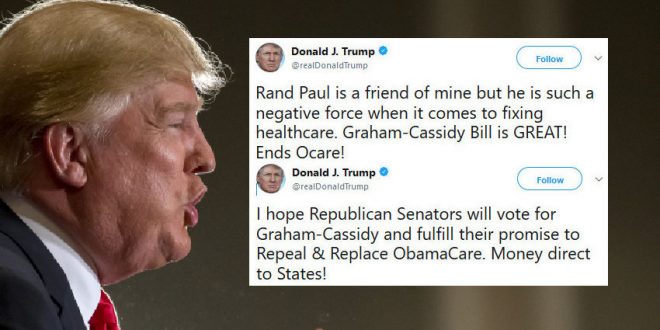 Libertarian-leaning Sen. Rand Paul is “such a negative force” on Republican efforts to repeal and replace Obamacare, President Donald Trump wrote on Twitter Wednesday morning amid a final GOP push to overhaul the nation’s healthcare system.

Republicans have only until the end of September to pass the bill via a Senate procedure called reconciliation, which would allow the GOP to approve the legislation with as few as 50 votes instead of the usual 60.

Rand Paul is a friend of mine but he is such a negative force when it comes to fixing healthcare. Graham-Cassidy Bill is GREAT! Ends Ocare!

I hope Republican Senators will vote for Graham-Cassidy and fulfill their promise to Repeal & Replace ObamaCare. Money direct to States!

#GrahamCassidy is amnesty for Obamacare. It keeps it, it does not repeal it. I will keep working with the President for real repeal.