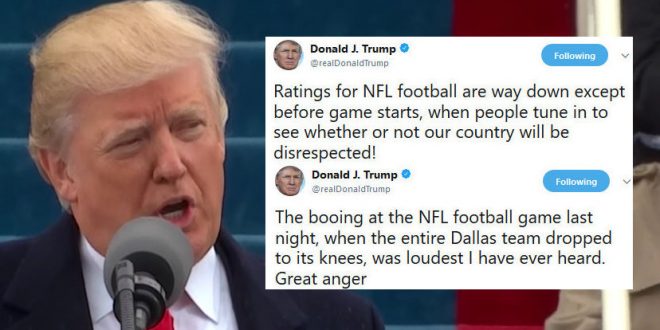 President Donald Trump said online Tuesday morning that the booing prompted by the Dallas Cowboys’ decision to kneel Monday night before the national anthem was the “loudest I have ever heard,” blaming the protesting trend for declining NFL ratings.

It is the fifth consecutive day that Trump has attacked football players who kneel during the national anthem and the NFL for allowing it. Such acts of disrespect towards the American flag and national anthem should not be allowed, Trump has said, although his criticism has seemed only to trigger more protests and to unify the league on an issue that had previously divided it.

The Cowboys and owner Jerry Jones locked arms and took a knee in unity prior to the national anthem pic.twitter.com/7kK3qVMDSo

Ratings for NFL football are way down except before game starts, when people tune in to see whether or not our country will be disrespected!

The booing at the NFL football game last night, when the entire Dallas team dropped to its knees, was loudest I have ever heard. Great anger

But while Dallas dropped to its knees as a team, they all stood up for our National Anthem. Big progress being made-we all love our country!

Luther Strange has been shooting up in the Alabama polls since my endorsement. Finish the job – vote today for “Big Luther.”