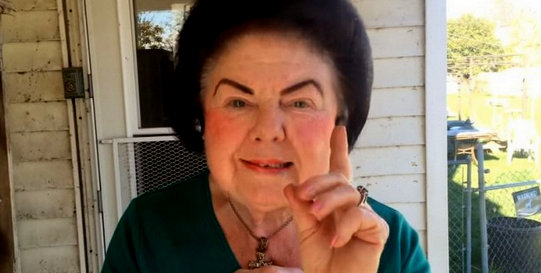 Two weeks ago “prophetess” Opal Covey warned that God will do to Toledo what he just did to Houston if she doesn’t win the mayoral primary.

“It’s overdue! The judgment has been upon Toledo for a long time. God sends a prophet like me, saying, ‘Let this city go! This city is mine!’ And I’ve told them what God wants to do and they have rejected it! Ah see-ah a ma ma man asha tay-yah! Know that I am a vengeful God and I will destroy you for disobedience!”

Incumbent Mayor Paula Hicks-Hudson declared victory in Toledo’s mayoral primary race Tuesday night, but added her campaign still has a lot to do if she is to defeat Wade Kapszukiewicz in the general election.

Ms. Covey, 77, has run five times before and has never received more than 1 percent of the vote. Deputies escorted her out of the Early Vote Center Tuesday night after she was asked to be quiet.

After her previous loss, Covey declared that she would no longer stop God from destroying Toledo, as he told her he would if she was not elected. “God has already told me if I wasn’t on that seat this time, that destruction is gonna come. And I’m standing back and I’m gonna let it happen.”