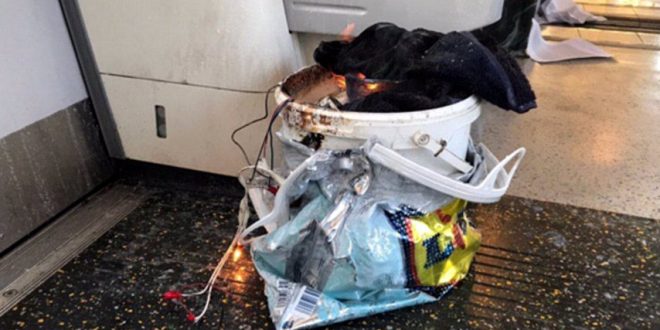 Britain was hit by another terrorist attack on Friday morning, when a crude device exploded on a crowded London Underground train, injuring several commuters, sowing panic, disrupting service and drawing a heavy response from armed police officers and emergency workers.

The explosion occurred at 8:20 a.m. on a District Line train as it left the Parsons Green station in Southwest London. “This was a detonation of an improvised explosive device,” Assistant Commissioner Mark Rowley, a top counterterorrism official, said at a news conference. He urged anyone who saw what had happened, or had taken photos or videos of the bombing, to come forward.

The authorities immediately beefed up security around the transit system, as hundreds of police officers and detectives combed the scene for clues. At least 18 people were taken to hospitals. Several of them were apparently injured as panicked commuters fled. None had life-threatening injuries.

PM: My thoughts are with those injured at Parsons Green and emergency services who are responding bravely to this terrorist incident.

Another attack in London by a loser terrorist.These are sick and demented people who were in the sights of Scotland Yard. Must be proactive!

The president:
1) Maybe revealed something re London attack/Scotland Yard?
2) Immediately used it to call for unspecific "larger" travel ban pic.twitter.com/5KzCxx0gtw

Unclear if the "in the sights of Scotland Yard" part of this tweet is correct. Is the President revealing something that MetPD have not? https://t.co/9Qh0zqYLyB

Loser terrorists must be dealt with in a much tougher manner.The internet is their main recruitment tool which we must cut off & use better!

The travel ban into the United States should be far larger, tougher and more specific-but stupidly, that would not be politically correct!

We have made more progress in the last nine months against ISIS than the Obama Administration has made in 8 years.Must be proactive & nasty!

"Why Parsons Green, so many why questions" – Witness to Parsons Green train explosion in London https://t.co/qfox27SbnJ pic.twitter.com/j9J03Jt4RR

Previous Trump Again Complains That His Hands Are Too YUGE To Wear Rubber Gloves During Hurricane Relief Stop
Next Dead Heat In Alabama GOP Senate Poll, But….