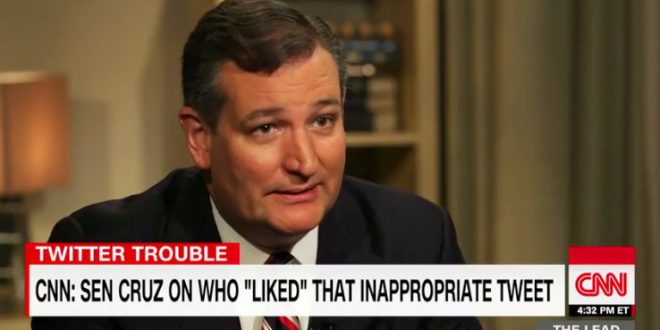 Sen. Ted Cruz denied Wednesday that he was the one who liked a pornographic video from his Twitter account. “It was not me,” Cruz said in an interview with CNN’s Dana Bash in Washington, calling the mishap “an honest mistake.”

Cruz reiterated the message from his office and said they had since identified the staffer, but refused to name the individual. “I promise you, the staffer feels terrible,” he said.

Cruz also addressed his time serving in Texas when he defended a state law that restricted sales of sex toys, and said he did not see the irony in the comparison between that and his response to the Twitter incident.

“I spent five and a half years as the solicitor general in Texas, I worked for the attorney general. The attorney general’s job is to defend the laws passed by the Texas legislature. One of those laws was a law restricting the sale of sex toys, which is a stupid law,” Cruz said. “Consenting adults should be able to do whatever they want in their bedrooms.”

“Dana, you know what gets me hot? Lowering corporate tax rates”