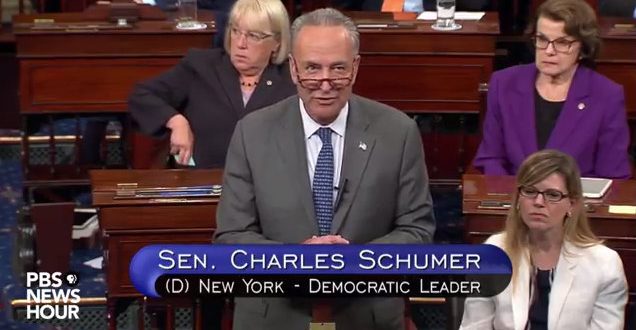 Senate Minority Leader Charles Schumer (D-N.Y.) is pledging that Democrats will fight the Trump administration’s decision to phase out an Obama-era program allowing undocumented immigrants brought into the country as children to remain legally.

“The human and economic toll of rescinding DACA will be far reaching and Democrats will do everything we can to prevent President Trump’s terribly wrong order from becoming reality,” Schumer said in a statement.

Schumer didn’t offer any details in his statement on how Democrats would try to push back against the Trump administration’s decision, which he called “heartless.”

“We often forget how vital these hardworking people and their contributions are to our economy and to tens of thousands of businesses who will be hurt if the administration’s order stands,” the Senate’s top Democrat said on Tuesday.

Previous Paul Ryan On DACA: Congress Must Work For A Solution To Protect Young People Who Did Nothing Wrong
Next Jim Bakker And Guest: God Sent Harvey As Punishment For Gay Wickedness, Just Like He Did To New Orleans