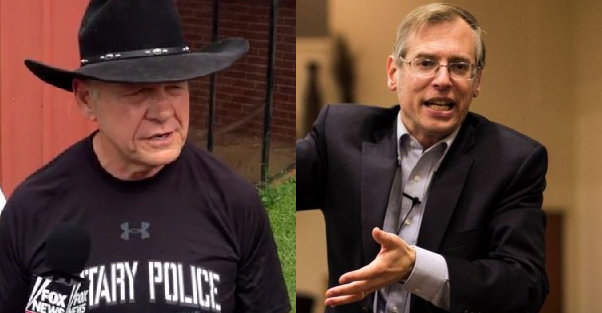 Roy Moore, a Republican candidate for US Senate in Alabama, has appeared multiple times on a radio show hosted by a controversial pastor who preaches that the biblical punishment for homosexuality is death.

Moore, the former chief justice of the Alabama Supreme Court, is in a runoff primary race against fellow Republican and incumbent Sen. Luther Strange. Moore is a hardline conservative, who made his name in Alabama by championing social and cultural issues popular with the religious right.

Moore has appeared on pastor Kevin Swanson’s Generation Radio at least five times and as recently as this February, a CNN KFile review finds. Swanson is a Colorado-based pastor who on several occasions has preached that the biblical punishment for homosexuality is death. Most recently, Swanson tied Hurricane Harvey in Houston to the city having “a very, very aggressively pro-homosexual mayor.”

PREVIOUSLY ON JMG: Swanson first earned national headlines in 2015 by calling for the execution of homosexuals shortly before introducing Ted Cruz to speak. A Cruz spokesman later expressed regret for the appearance, but only after weeks of furor from the media. Last year, Swanson declared that the Pulse massacre victims got what they deserved because “God gives up on sinners.” In May of this year, Swanson warned that the goal of public schools is to turn children into “transgender communists.” Last month Swanson declared that pro-LGBT public schools should all be “burned to the ground.” Last week Swanson declared that God would spare the country from Hurricane Irma if the Supreme Court would immediately reverse their same-sex marriage ruling.