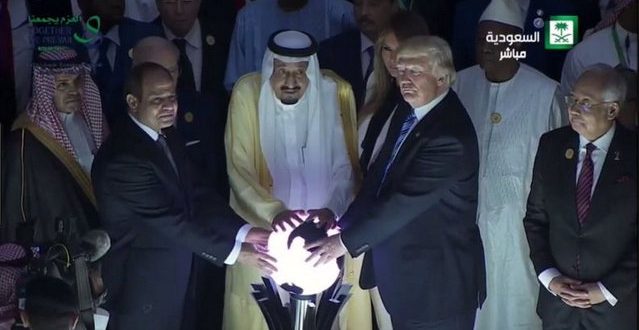 Saudi Arabia’s Gifts To Trump Include Cheetah And Tiger Fur Robes, Daggers, Swords, Paintings Of Himself

During the presidential campaign, Donald Trump attacked Hillary Clinton for accepting money from the Kingdom of Saudi Arabia, complaining during one of the debates, “These are people that kill women and treat women horribly and yet you take their money.”

That was, of course, before he made his first foreign visit as president to Saudi Arabia—and accepted dozens of gifts from the kingdom. In fact, during Trump’s visit, the White House accepted at least 83 separate gifts from Saudi Arabia, according to a document The Daily Beast has obtained via a Freedom of Information Act request to the State Department.

The gifts range from the regal (“Artwork featuring picture of President Trump”) to the martial (multiple swords, daggers, leather ammo holders and holsters), to the baroque (tiger and cheetah fur robes, and a dagger made of pure silver with a mother of pearl sheath). Now when the president is contemplating the state of Saudi women’s rights, he can do so before a “large canvas artwork depicting [a] Saudi woman.”

Hit the link to see the full insane list.

Previous Joel Osteen: God Sent Hurricane Harvey Because He Knows You Can Handle It, Take It As A Compliment
Next Nikki Haley: North Korea Is Begging For War [VIDEO]