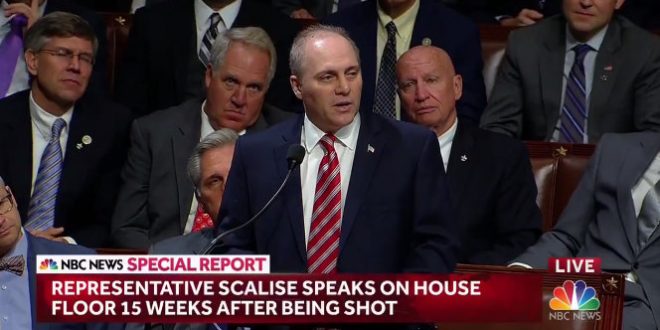 House Majority Whip Steve Scalise was met with applause on the floor of Congress after returning to work for the first time today since being shot during a congressional baseball game practice. Scalise “will participate in this morning’s vote series and address his colleagues on the House floor in his first public appearance since the shooting,” his office said in a statement. Scalise has been recovering for more than three months after sustaining gunshot wounds during the attack in Alexandria, Virginia, on June 14.

Rep. Scalise tells U.S. Capitol Police Officer David Bailey: “David – you are my hero, you saved my life. Thank you so much.” pic.twitter.com/j5LlTSXtKw

House floor gives standing ovation to Rep. Steve Scalise who returned to Capitol Hill after being shot in the Alexandria shooting in June. pic.twitter.com/QwlGQcwabI