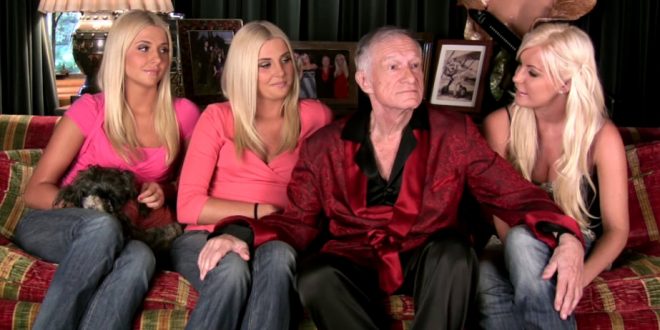 Hugh Hefner, who parlayed $8,000 in borrowed money in 1953 to create Playboy, the hot-button media empire renowned for a magazine enriched with naked women and intelligent interviews just as revealing, has died. He was 91.

“My father lived an exceptional and impactful life as a media and cultural pioneer and a leading voice behind some of the most significant social and cultural movements of our time in advocating free speech, civil rights and sexual freedom,” read a statement from Hefner’s son, Cooper Hefner, chief creative officer of Playboy Enterprises. The company announced that Hefner died in his home at the Playboy Mansion of natural causes on Wednesday.

While most famous for Playboy, the businessman dabbled in all forms of media, including hosting his own TV shows, beginning with Playboy’s Penthouse in the late 1950s and early ’60s. Shot in his hometown of Chicago and syndicated, the show featured Hefner in a tuxedo and smoking a pipe surrounded by “playmates” and interviewing such celebrities as Bob Newhart, Don Adams and Sammy Davis Jr.

Perhaps obviously, I really did read it for the articles.

Previous Tony Perkins: Most STDs Are “Incurable”
Next TODAY: Twitter Speaks To Congress On Russia Probe