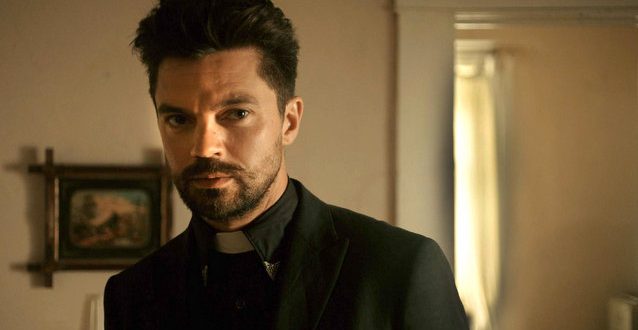 One Million Moms Vs AMC’s Preacher

Jesus will not be mocked! The AMC series “Preacher” is advertised as gory good fun and airs during primetime. The “preacher” in the show is far from it, and the program blasphemes Jesus in a recent episode with the Son of God depicted as a lying s-x p-rvert.

For starters, you can be assured with a TV-MA rating, it is not appropriate for television.The show “Preacher” is another attempt to distort the truth about Christianity. The sacrilegious program mocks Christianity and ridicules people of faith. This dark show can make believers sick to their stomachs with the blasphemous content.

In the episode “Dirty Little Secret,” the main character, Jesse Custer, searches for God as he eventually crosses paths with the religious organization known as The Grail. The show decides to spend its first five minutes depicting Jesus Christ having gratuitous s-x with a married woman the night he is arrested in the Garden of Gethsemane.

They are shown moaning and screaming in multiple positions during this extremely graphic scene. The woman he is with tells the Jesus character not to worry as her “husband will not be home for days.”

After the marathon s-x session, Jesus admits he was a virgin and then gets ready to leave, subtly referencing the Last Supper and upcoming crucifixion. He is then caught by his disciples so he lies his way out of the situation, but not every disciple believes him.

This disrespectful program mocking Jesus and the Christian faith has now gone too far. AMC has crossed a line in misleading viewers about Jesus Christ, but would never in a million years air a show that defamed Muhammad in a similar fashion for fear of instant and violent reprisals.

Jesus Christ portrayed as a s-x fiend who lies to his disciples about the Savior of all mankind’s night of betrayal in Gethsemane is only the beginning. The disgusting episode does not end there.

The program closes by portraying Jesus’ descendant as mentally handicapped as a result of inbreeding. He urinates on the preacher, Jesse Custer, because he doesn’t know better, and then shows him his privates. The series “Preacher” is promoting bigotry and animosity toward people of faith.

Take Action: Please use the information we have provided on our website to contact Febreze (owned by Procter & Gamble) and ask that they pull their financial support from “Preacher.”